The Rule of Three

Over the decade we have lived in our current home, we have transformed what was once two acres of woods with a too-large lawn into what we think is an attractive series of interconnected gardens: shrub beds, perennial borders, xeric beds and specimen trees – and a lot less lawn. I have willingly contributed the labor while my wife, the Master Gardener, provided the intelligence and design prowess.

But there comes a point in a garden’s evolution when the place is, well, full. For a period of time after that, new plants can be introduced by filling in gaps. Inevitably, however, you run out of space and, short of cutting down more trees to open up new territory, you have to learn to live within your garden footprint.

We reached the saturation point about three years ago. But nothing has diminished my wife’s interest in adding new specimens. A trip to a nursery ‘just to look around’ inevitably results in something up coming home with us. When those new shrubs or trees or perennials arrive at out home, there begins a game of musical chairs that I have come to think of as ‘the Rule of Three’.

The Rule of Three works like this: my wife falls in love with a new cultivar of Itea virginica ‘Little Henry’. ‘Little Henry’ is swaddled in burlap and comes home with us. My wife notes that ‘Little Henry’ is an ideal candidate for the shrub bed out in front of our property because it wants lots of sun, can tolerate a fairly dry area, and has colorful fall foliage that just might serve as an inspiration to our neighbors to get rid of their invasive burning bush.
Unfortunately, there’s a problem. Our shrub bed already contains more than twenty specimens. She begins walking the bed. She views the bed from multiple angles. Finally, she makes a determination: the Baptisia (false indigo to the rest of us) has to go. It never looked good there and it didn’t bloom this year until late July and then only for a few weeks.


Thus, we have the first hole. Out goes the Baptisia and in goes ‘Little Henry’.

But that’s too easy a solution. There’s nothing wrong with the Baptisia, it just wasn’t up to snuff for such a prominent locale. A home needs to be found for this misplaced plant. Once again, the entire garden is paced and viewed from multiple angles. Like ‘Little Henry’, the Baptisia also wants lots of sun and is tolerant of a dry spot. There are a limited number of such locales on our property.
It just so happens there is such an area in our xeric garden, created two years ago from what was once the strip of grass between the sidewalk and street. There is even a lovely spot for it just by the mailbox. The Baptisia would look perfect there. Unfortunately, that spot is currently occupied by a square foot or so of Hypericum calycinum, a ground cover with an attractive yellow flower that is, alas, effectively invisible from the street.
And so we have the second hole. Out goes Hypericum, to be replaced by the displaced Baptisia. 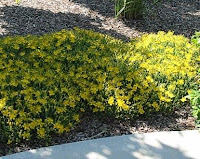 By now, you’re wondering if this plant version of musical chairs is going to go on infinitely. It could, but it turns out that Hypericum (sometimes called ‘Aaron’s Beard’) was a sort of failed experiment. My wife planted it (it was a gift from a fellow gardener) but never grew to love it.
But in our garden, things never get thrown away (except Rudbeckia, which goes straight into the mulch pile). And so a third hole is dug. This one is in the transplant bed, an area where sick plants go to get healthy and unwanted plants go to be potted up for the annual plant sale held by our local garden club. Hypericum will rest there until early May, when it goes to a new, more appreciative home.

That’s the ‘Rule of Three’: the introduction of any one, new plant requires the digging of three holes.

There is a corollary to the ‘Rule of Three’. I call it the ‘Rule of the Rock’ and it states that any perennial, tree or shrub put into a previously unplanted area will require the removal of a rock. Usually a big one. There is a handsome stone wall out in front of our property that wasn’t there when we moved in. Some of the biggest rocks in that wall were the result of putting in tiny hostas that ‘had’ to go in a certain area.
Now, you can only imagine what happens half a dozen new plants are brought in at once…
Posted by The Principal Undergardener at 10:36 AM