The end of March brought two images worth sharing.

For most all of March, it has been wet and cold and a foot of snow blanketed the property.  As a result, the fifteen or so containers we have been overwintering in the garage have limped along with just the light from a single south-facing window to provide the stuff of photosynthesis.

Sunday, though, brought sixty-degree temperatures and so, for the first time in 2013, an array of Zone 7 and 8 shrubs came out of the garage and into the warmth and sunshine.  From left to right, an acuba, cape plumbago, and a loropetalum get acclimated to spring.  Behind them, a snow bank still tops out at three feet.

Sunday's outing was a one-day event.  By evening, temperatures were back into the low 40s.   By later in the week, though, they'll be back outside, basking in sunlight.


* * * * *
On a crisp, cold morning in early February, I walked out my front door and was confronted with proof that nature always has the ability to startle us.  There, in an otherwise barren patch of earth, a half dozen white hellebores were in full, glorious bloom.  They caught the sun’s weak rays, preening like movie stars.

The very next day, they were buried under 18 inches of snow.

I thought little about them for the next seven weeks.  The inner sidewalk bed absorbed snow pushed off from the driveway from repeated storms.  For much of the time, two feet of dense ice greeted visitors.

Then came the late-March melt and the snow pack retreated daily.  By this weekend, the snow was gone from all those areas except where it had been pushed by hand or thrown by machine.  On Sunday, the retreat was startling and, by the hour, the inner sidewalk bed showed more and more soil.

Sunday afternoon, I saw something startling:  that same clutch of hellebores that had been buried under the snow and ice.  They were a little limp at first then, by the hour, they perked up.  By mid-afternoon, the hellebores were as though the storms had never happened.
Posted by The Principal Undergardener at 10:46 PM No comments:

Today’s mail brought an eagerly anticipated package, a publication with a brown paper cover.  Once upon a time, mail received in a ‘brown paper wrapper’ carried a certain unsavory connotation.  For the past six years, it has been a badge of honor.

The publication in question is the 2013 edition of the Garden Conservancy’s Open Days Directory, 304 pages and hundreds of properties strong.  This 18-year-old program is a marvel of organization and good works.  The Garden Conservancy exists to preserve irreplaceable American gardens; the Open Days program is both a fund-raising tool and an educational outreach project.

More than 3,000 individual gardens have been open for visitation since 1995 and, each year, approximately half of the gardens are new (we opened our own garden for the Conservancy in 2008).  The first garden of 2013 opened on March 23 in Houston; the last one will be on November 2 in Mount Kisco, NY.  I counted a total of 426 gardens in 17 states, certain of them open multiple times for roughly 500 visitation opportunities.

The Garden Conservancy is strongest in New York and the Northeast.  Connecticut has 39 open gardens this year; 79 are in New York.  I note that for the first time this year, gardens will be open for the Conservancy in Charleston, South Carolina, all on May 25.  There are also a sizeable contingent of gardens in California and Washington.
Over the years, I have visited close to a hundred gardens under the auspices of the Conservancy.  A small number have been ‘reviewed’ in this blog (you can see write-ups here, here, here and here) but most are seen just for the pleasure and for the gathering of ideas.  No two gardens are alike.  Some are clearly professionally designed and maintained; others are just as clearly labors of love of the homeowner.  There are grand estates and quarter-acre pocket gardens.  I have never been to one that could be described as ‘non-descript’; each has a vision that is well articulated.

A handful have been memorable duds – extravagant layouts conceived by landscapers and bereft of anything unusual.  Those are more than outweighed by the dozens of gardens that are one-of-a-kind visions.
If you are a member of the Garden Conservancy, you receive a copy of the Open Days Directory as part of your membership.  Otherwise, look for them at garden centers and nurseries.  Entry to gardens is $5, members can also order a book of six tickets for $15.  We regularly go through several books of tickets each season.

The Open Days schedule is also available online, although certain garden owners request that their property be listed only in the directory.

If you’ve never been to an Open Days garden, make this the year that you start.  It is gardening education at its most enjoyable.
Posted by The Principal Undergardener at 8:44 PM No comments:

The Enid Haupt Conservatory, the huge, turn-of-the-20th-Century glass house that is the icon of the New York Botanical Garden, is a chameleon.  The trees and shrubs inside don't change, but their coloring is as malleable as a jar of Silly Putty.  One day, the interior space hosts a tribute to Emily Dickinson, the next, it has been transformed into Monet's Giverny.  Each year at Christmas, a train runs through it.  And, each March and April, it becomes a tropical paradise filled with orchids.

We were at the eleventh annual edition of The Orchid Show yesterday.  It was snowing in New York but, in a cavernous Lord & Burnham structure in the Bronx, it was a balmy 70 degrees and the air was redolent of vanilla and spice.  We were the first visitors inside (see below) and we had the opportunity to linger over both the 7,000 orchids on display and the explanatory text that accompanied many exhibits.

The rotunda is filled with orchids; they reflect beautifully against the large pool.  Then, as you circle the conservatory clockwise, the exhibition begins to build, like a fireworks display.  Each hall provides a fresh burst of color, together with text panels to put everything in context.  By the time you get to the 'special exhibits' halls (the NYBG's equivalent of that fireworks show's grand finale), you have a good, if basic, understanding of where orchids come from and how they fit into the plant kingdom.  It is horticulture as entertainment, but you can't help but come away a bit wiser.

It was also a reminder that New England is not alone in being still in the grip of winter.  Apart from some aconites, NYBG is still very much buttoned up for winter.  Somehow, we found that comforting.

While the Orchid Show stands as an independent attraction for NYBG and a welcome end-of-winter retreat, it is also a reminder of an important role the garden plays in the orchid world.  Each year, thousands of rare or endangered orchid plants are confiscated at various U.S. ports of entry.  Rather than being destroyed, many of them are shipped to New York and placed under NYBG's care.

The NYBG's publicity machine has worked overtime to make this year's show known to everyone on the planet and, as a result, the show is mobbed.  We left our suburban Boston home at 6:15 a.m. and pulled up to the visitor's entrance at 9:35.  The garden does not open until 10 a.m. but we were allowed to park in the valet area until the lot formally opened at 9:45.  Once we had our parking spot, we found we could go directly into the gardens.  We made a beeline for the Conservatory and found, because of the temperature and biting wind, that we were allowed to wait in the orchid-filled rotunda, even though it was still just 9:50.  As a result, we were into the Orchid Show with just a handful of people.  When we left at noon, the show was extremely crowded.
Posted by The Principal Undergardener at 9:53 AM 1 comment:

Boston had an inch of rain last night.  That soaking, coupled with temperatures in the 40s, has produced a landscape of ugly, brown snow banks and six-inch-deep puddles that coat all cars with grey grime.  In a word, ugh. 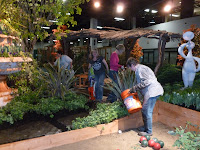 I have spent the past four days at the Seaport World Trade Center creating a small taste of spring.  In 1200 square feet, Paul Miskovsky has created a vignette of an idyllic May day in the country, complete with chickens.  His small crew, aided and abetted by a phalanx of Master Gardeners, built the display between Saturday morning and Tuesday noon.  And, right up until Carolyn Weston shooshed everyone off the floor in advance of the judges, we were primping and grooming plants, spreading compost and removing anything that had even a whiff of imperfection.

Being only a Master Gardener Groupie, my job was spreading mulch (Saturday), hauling plants (Sunday), lifting plants (Monday) and spreading compost (Tuesday).  But I can point to the exhibit and say that I had a hand in it.

Tuesday evening, we all gathered together for a quiet party in the exhibit: a well-deserved celebration.  Paul's exhibit fairly well swept the awards, including 'Best of Show', the topmost one.

If you live within a few hour's drive of Boston and desperately need proof that the wet, dreary winter is almost at an end, please go to the Boston Flower & Garden Show.  It is a marvelous event.  Paul's exhibit is just one of two dozen such vignettes.  There are also stunning floral design competition, a knock-your-socks-off photography competitions, rooms full of amateur horticulture (including a blue ribbon croton from Betty Sanders), and vendors selling everything under the sun that has anything to do with gardening.

These photos were all taken on Tuesday at noon.  They show the exhibit as it was just before judging, with everything designed to be at the peak of horticultural perfection.  Double-click on any photo to see it at full-screen size.
Posted by The Principal Undergardener at 8:44 AM No comments: