It is a myth wrapped in hope, buttressed by observation, but ultimately nothing but serendipity. The January thaw came this morning and temperatures are headed into the fifties. Coupled with an inch of predicted rain, the blanket of snow currently on the lawn will soon be reduced to a few stripes of white thrown by the snow blower.

As a naturalized citizen of New England I come to the January thaw as an observer and not necessarily as a true believer. I am well aware that for the past thirty days the temperatures have seldom crept above freezing. I also have in front of me the irrefutable evidence that I retrieved the newspapers this morning in nothing but a robe. So, indeed, because the Boston Globe says January, this must be the January thaw.

I first heard of the January thaw when I lived in North Carolina after college. A co-worker who had grown up in Schenectady, New York, told me that when the Capital District enjoyed its one- or two-day January thaw, people drove around in their convertibles with the tops down, in tee shirts and bikinis. This happened despite the fact that temperatures would top out at around 40 degrees. I didn’t believe him; it was too preposterous. But then, I didn’t believe the tale of the L Street Brownies descending into Boston Harbor on New Year’s Day, either. 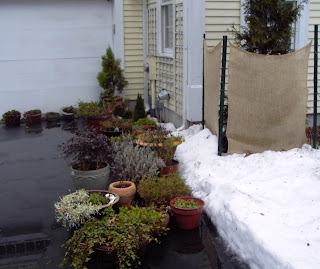 The January thaw begins a three-month-long ritual of shifting plants. Last month, I wrote that the tropicals which summered on porches and patios came indoors for the winter to glean sunlight through south facing windows. A contingent of perennials and quasi-hardy plants made do in the garage where they jostled for the feeble light through a single window.

This morning, those plants rode on wheelbarrows outdoors for what is expected to be at least two days of January sun. They are encamped in rows on the driveway where the asphalt will provide additional retained heat. That there is snow just a few feet away does not matter. The rain will wash their leaves and provide their first moisture in weeks.

This year we are wintering over approximately twenty containers (another twenty-plus were cleaned and are stacked in the basement awaiting the 2010 gardening season). Some of those containers hold cultivars that are hardy to Zone 5, but it is the terra cotta containers that cannot take the freeze-thaw cycle. A few are hardy in more southern climates and find the just-above-freezing temperatures in the garage acceptable. These days outdoors will help replicate the warm spells and lengthening days in their natural habitat, the better to ensure early blooms. There is a pot-bound hydrangea that already has swelling buds and a perennial snapdragon with a lone, bright red flower.

It takes about twenty minutes to wheel out the plants and set them up; another twenty or so to re-group them in the garage. Last year, a smaller number of containers made more than a dozen such excursions. Some were as short as a single day but in March and April, the outdoor respites stretched to three and four days.

If my math is correct, that means I’ll spend eight or nine hours over the course of this winter running a plant shuttle. It’s a modest price to pay for early greenery and to see old, reliable plants come back stronger each year.

Finally, as a side note, the accompanying photo of overwintering plants out for their January sun also shows our efforts to protect a Thuja occidentalis, or western cedar from the depredations of snow blowers. In November, we pounded metal fence posts into the ground around the Thuja, then placed burlap roughly five feet high between the fence posts, strung with wire. As of the end of January, the burlap is tight and the tree untouched. It is both decorative and effective.
Posted by The Principal Undergardener at 11:24 AM No comments: