A Festival of Lights, and Imagination

Last evening was uncommonly warm for late December.  Moreover, it was raining.  The confluence of those two meteorological events caused Betty and me to get in our car and head for West Boylston, Massachusetts, to see the 19th annual installment of ‘Winter Reimagined’ at the Tower Hill Botanic Garden.

Getting people to visit a botanical garden in winter is a marketer’s challenge.  The New York Botanical Garden hosts a ‘Holiday Train Show’ in its Conservatory.  The Massachusetts Horticultural Society has a Festival of Trees.  The Worcester County Horticultural Society, which is more or less synonymous with Tower Hill, has come up with a stunning and original alternative: a festival of lights outdoors, and a fairy land of whimsical trees and more lights indoors.  These blog pieces customarily include captions with all photos.  In this case, they seem superfluous.  I encourage you to double-click on any image to see a full-screen slideshow.

The outdoor component is worth a trip all by itself.  The formal gardens around the Tower Hill campus are decked out in lights; each tree and hardscape structure a different color.  The effect is stunning and the view dramatically changes as you walk within individual gardens.  Even the ground covers are strung with lights.  A lot of thought and considerable imagination has gone into creating vistas that cry out for you to stop to admire and try your hand at nighttime photography.

It’s the indoor part, though, that pulls out all the stops.  Tower Hill starts with two exceptional assets: a pair of gorgeous conservatories, the Orangerie and the Limonaia.  Both are filled with mature subtropical plants that are an antidote to a New England winter.  For Winter Reimagined, there are lights.  Not overpowering and not intrusive.  The lights are subtle tweaks that turn an already handsome pair of spaces into something that is, well, romantic. 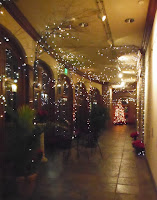 The other indoor spaces within Tower Hill are given over to decorated trees and something very special and unusual: an igloo.
First, the trees.  You’re probably thinking, “another Festival of Trees”.  You’re wrong.  Yes, these are artificial Christmas trees and, yes, they’re decorated.  But that’s where the similarity ends.  These trees are decked out to be in sync with nature.  The materials on many of the trees are pine cones, seed pods, nuts and such.  For others, the theme is recycling: everything on the tree is re-purposed from everyday disposable objects.  Think flowers from soda bottles, for example.  A tree sponsored by one of Tower Hill’s caterers has a ‘topper’ of gold-sprayed forks and knives gloriously exploding out of a Styrofoam ball.
You can’t win these trees in a raffle or buy them from Tower Hill; they’re there to admire and to inspire.  Many are the creation of the Tower Hill staff and volunteers.  Some trees are more memorable than others, but the overall effect is spectacular.

Then, there’s the igloo.  In a space beyond the Orangerie is a modest room and, in the room is a large reindeer, some trees sprayed white, and a luminescent igloo.  It’s maybe four feet high and eight feet wide and will comfortably seat three or four children.  It’s made out of (pause for dramatic effect)… plastic milk jugs.  Several hundred gallon-sized containers that would have otherwise had a single two-week existence as a holder of milk or less wholesome beverage have been re-purposed to create a fun environment.  It’s a kid magnet and I hope the adults chaperoning those children take the opportunity to speak to their charges about the wonders of recycling. 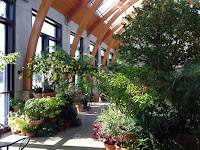 There’s no Santa at Winter Reimagined.  This is a non-sectarian celebration that aims to lift everyone’s spirits on the shortest days and longest nights of the year.  The event runs through January 3rd.  It is free to Tower Hill members.  Non-member adults pay $15, seniors are $10, children 6-18 are $5 and those younger are free.
Posted by The Principal Undergardener at 8:29 PM No comments:

Something seems to come over garden clubs in December: they suddenly get extraordinarily creative and preternaturally festive.  Last year I wrote about three such club events:  a house tour in Hingham, a Greens Sale in Medfield, and a Festival of Trees in Easton.  This year, Betty’s and my travels took us to several other club events.  Two of them stand out for sheer exuberance.
Stoneham, Massachusetts is a beautiful town.  Just eight miles north of the center of Boston, more than a third of the town’s 6.7 square miles is taken up by the Middlesex Fells Reservation and bucolic Spot Pond.  In the 1930s, a local industrialist created an estate on one of the highest points of land in town and built a Tudor-style home.  The estate, Whip Hill, was bequeathed to the town in the late 1960s and the grand house serves as a meeting place for local organizations, including the Stoneham Garden Club.
On the second Saturday of each December, the Stoneham Garden Club throws a Christmas party for the town.  The club elaborately decorates several rooms.  There’s a large model railroad village on a tabletop to ‘wow’ the kids.  Warm apple cider and Christmas cookies are doled out by the hundreds.  Best of all, one room is given over to a Kris Kringle who is a dead ringer for Edmund Gwynn.  The line to see Santa stretches for a hundred feet, and every kid gets not just a lollipop, but enough quality time with the Big Guy to be assured that their wish list will get a fair hearing back at the North Pole.
You’re probably thinking that this is a terrific fund raiser.  And, it probably would be except that there’s no charge (although donations are accepted for the cookies).  This is the club’s present to the residents of Stoneham.  And, when we were there, Whip Hill was overflowing with visitors.  It is a wonderful tradition.
Oh, and it isn’t the only way that the club ‘gives back’ to the community.  After an ice dam caused extensive damage to the beautiful antique pine floors in two rooms at Whip Hill, the Stoneham Garden Club picked up the check for refinishing the floors.
A day later, we were in Littleton, Massachusetts for the 2015 installment of the Littleton Country Gardeners’ Holiday House Tour.  Decorated houses are a fund-raising staple for garden clubs.  The trick is to find between five and ten homeowners who do a great job of decorating and are willing to open their houses to total strangers for a day (the other trick is to have an incantation that will ensure good weather).
Littleton has a wonderfully active garden club that maintains 13 ‘wayside gardens’ around the community and has undertaken the replanting of gardens on the town common as well as at the town hall.  There’s a fresh floral arrangement each week at the town library. That’s just part of how the club serves its exurban community of 9,000, 26 miles northwest of the Financial District.  The Holiday House Tour helps defray the cost of those good works.
A good tour starts with a good program book.  Littleton’s provides an easy-to-follow map with a paragraph-long synopsis of what makes the decorations interesting and, where appropriate, a history of the house (one of the homes on the tour dates to 1780).  The Littleton program also includes a photo of the house’s exterior to help identify the location.
Every good tour should have at least one home where the owner or owners pull out all the stops.  A home on Goldsmith Street in Littleton fit that description to a tee.  She starts decorating in October.  From the outside, the home is a pleasant, sprawling 1930s Cape.  In the inside, it is Christmas in every room and it is glorious.  Every flat surface in the home is occupied by a tree, a Santa, a village, carolers, or some other reminder of the holiday.
How about a post office-themed Christmas tree?  There was one, and if I looked long enough for the right kind of ornaments, I could probably replicate that tree.  But how about a tree with a theme of India?  I marveled at a tree overflowing with elephants, Hindu goddesses, peacocks… you name it and, if it had anything to do with India, it was on tree.  I asked the homeowner how many times she had been to India.  “Never,” she said.  “I just saw a few ornaments and went on from there.”
A good house tour should also include an informative and talkative host.  At that circa-1780 house, the homeowner was more than pleased to take us on a guided tour of the downstairs, starting with the core historic building and then showing us how the colonial-era elements were preserved and incorporated into an attractive, modern home.  And our personalized tour, of course, was held amid a very beautifully Christmas-decorated home.
The other thing I look for in a house tour is a ‘why-didn’t-I-think-of-that?’ moment, and I found it at a log home on Foster Street.  Amid a home filled with eclectic collections, I encountered a firewood rack filled with foot-long pine logs next to a fireplace.  Nothing unusual there, except that these logs all bore hand-written inscriptions like ’97 and ’99.
Baffled, I asked the homeowner if she could explain the meaning of the numbers on the logs.  She explained that, each year, the family purchased a 14-foot-tall tree for their cathedral-ceilinged family room.  And, each year, when the tree came down, they cut off the bottom-most foot of the tree and inscribed the date.  It was their way of keeping a little piece of each Christmas so that they could enjoy it for years to come.
Now why didn’t I think of that?

Posted by The Principal Undergardener at 3:44 PM No comments: