Garden Ornaments, Memories of People and Places Past

Berkeley the snail is getting ready to go away for the winter. This weekend he will join the World’s Ugliest Frog, Fish, and a dozen other garden ornaments in the safe confines of our basement. He will be first cleaned with a bleach solution and then placed carefully inside a pot or some other protective container.
Berkeley joined our garden menagerie as a result of a trip to London ten years ago. I was there as part of a financial road show in deepest, darkest February. Because of the road show’s grueling, two-week duration, Betty had been invited to join me for its final, transatlantic stop. The underwriters were responsible for all lodging and they chose for us a junior suite at The Berkeley, an extraordinarily luxurious Knightsbridge hotel a stone’s throw from Hyde Park.

Going to gardens was quite out of the question so, instead, we went shopping and to museums. Just down the street from our hotel was a shop that dealt in garden ornaments (they have such things in England) and the snail pictured on the left was prominently on view. We purchased it, promptly named it after our lodgings - pronounced, by the way, “BARK-lee” - and carried it in the overhead bin on the flight home. (In that pre-9/11 world, no one in airport security took notice of our carrying onboard a 12-inch-by-fifteen-inch cast-iron object.) Every year since, Berkeley has been positioned in a different perennial bed, waiting to be admired anew by us or a visitor.

The World’s Ugliest Frog was a parting gift from a friend leaving Medfield. She was moving, and the frog had graced, if that word can be used for such a thing, her garden for many years. Its muted, polychrome décor had been the butt of numerous jokes. On the day that the packers came, Mary Anderson brought over the frog and said that World’s Ugliest Frog should come live with us. It has a permanent, seasonal home underneath a magnificent “Alfred’s Crimson” peony that blooms for Memorial Day every year.

I will not bore you with the individual stories for each of our other garden ornaments. I will only tell you that they all have back stories and that all those stories link us to times, places or people fondly remembered.

Oh, all right, one more. An outrageously overpriced concrete turtle at the Winterthur Shop was knocked down to a much more realistic five dollars after we pointed out a chip on its nose. For fifteen gardening seasons now, the turtle’s chipped nose has poked out of the water in a bird bath. We suffer its imperfection with as much dignity as we can muster. The butterflies and dragonflies that land on its snout don’t seem to mind in the least.

Each spring, we take out these items much as we take out Christmas tree ornaments in December. We discover them anew and, with great deliberation, place them around the property, taking into account changes in the landscape. This season, a chamaecyparis in our outer sidewalk bed pushed into the space long occupied by the turtle and its bath. The pair became the first occupants of the new wisteria bed and they look terrific there.

These garden ornaments are links to travels. They are reminders of old friends. They are also practical objects that draw the eye to certain plants or that break up expanses of mulch. Some are put in plain sight while others are deliberately hidden, awaiting someone to part the foliage and find a surprise. With the 2010 garden season nearly over, their careful cleaning and storage are also part of an annual ritual as distinct as picking apples or harvesting the butternut squash.
Posted by The Principal Undergardener at 4:03 PM 2 comments:

Autumn came with a vengeance last week. A nor’easter blew in on Thursday evening, bringing 45 mph winds and dropping two inches of rain in twelve hours. A cold front followed. By Friday morning, the storm was somewhere over the Maritimes, but the damage was done. Containers that just a few days earlier had been laden with wildly colorful coleus were nothing but stems with limp leaves. Other temperature-sensitive annuals were stripped bare by the winds.

In large measure, we’ve been living on borrowed time here in Eastern Massachusetts. It isn’t unusual to have a hard frost in suburban Boston in late September, and to make it to Columbus Day without sub-freezing temperatures is rare. But, with less than eleven hours of daylight now, the garden was starting to look ragged anyway. In mid-October, the summer gardening season is only a memory. 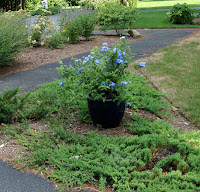 Betty and I spent this past weekend performing triage on the remaining containers, taking apart those that had only one or two plants remaining and re-positioning those that have more a durable portfolio of plants. Last year, we over-wintered roughly two dozen containers and were rewarded with a jump-start on spring color. Thus year, we’re contemplating cutting that back by half because the 2011 Boston Flower & Garden Show will emphasize container gardens and we hope to take advantage of ‘leftovers’ from that March event. 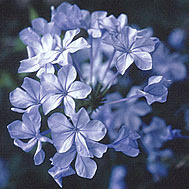 There are two containers that will definitely make the move indoors. The first contains a Plumbago auriculata, or Cape Plumbago. We acquired it this summer from Weston Nurseries and it is a beauty – two feet tall and (still) covered with pale blue clusters of phlox-like flowers. It spent its season in full sun out at the end of the driveway where it added a very nice touch of vertical class to an area planted in ground covers. The ‘Cape’ in the name, unfortunately, refers to the Cape of Good Hope, not Cape Cod. The plant is hardy to Zone 7. We’ll harden it off as best we can, but will have it indoors by early November. 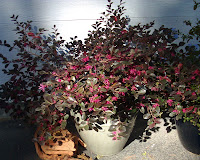 The second container holds a Loropetalum chinense ‘Rubrum’. It was a gift from Paul Miskovsky, an extraordinarily generous Cape landscaper who uses this Zone 7 plant as an annual at many of his gardens. We overwintered it last year and it came back not only strong but ready to bloom in mid-March. My problem had always been remembering its name. I finally hit on the mnemonic ‘Laura Petrie’ (the character played by Mary Tyler Moore on the old Dick Van Dyke Show which, if you’re over 50, you may remember).

Our Lorapetalum roughly doubled in size this year and to our amazement went into a showy second bloom in early September. In the South, the plants can get to twenty feet and are sometimes pruned into tree shapes. Ours resided as part of a cluster of containers at the border of the cottage garden and drew numerous compliments. We have now moved in into a sheltered location and, like the Plumbago, we will harden it off before bring it indoors next month.
Posted by The Principal Undergardener at 12:50 PM No comments:

I walked out to the end of the driveway this morning to collect our newspapers (yes, we’re dinosaurs who actually subscribe to the print editions of multiple newspapers), and was greeted by our stand of Helianthus angustifolius. It’s part of the ‘Manhattan’ bed and is the penultimate bloomer in that three-season site.

﻿﻿﻿
﻿﻿﻿ This is one remarkable perennial: it blooms after the first frost. Very tall (six-feet plus) on bamboo-like canes, it lies in wait at the back of the bed, waiting for its moment. It is hidden by a tall rudbeckia that blooms from August into mid-September, after which the birds have reduced the rudbeckia to stalks. Meanwhile, low-growing asters at the front of the bed started blooming in early September and are still in evidence.

But the Helianthus takes you completely by surprise. Until it blooms, it is truly part of the tall greenery at the back of the bed. Once it opens up, there’s no overlooking it. There are multiple – up to half a dozen – blooms on each stalk and their weight bends those stalks to a confounding series of graceful arches.

I would like to take credit for first planting this specimen, but honesty forces me to acknowledge that there was a small clump of it growing in the original Old Stone bed. We divided it, moving half out to the Butterfly bed where it would get better late summer sun. It took off (it spreads by rhizomes) and the clump is now about ten feet wide and two feet deep, fully intermingled with the aforementioned rudbeckia. Some years ago, we potted up a single plant, took it to a nursery, and asked for a further identification. Many books and websites were consulted but the nursery was unable to come up with a specific cultivar.

Bees love it, of course. It, along with the asters, is one of the last sources of nectar on the property. Betty spent part of yesterday cutting back daylily foliage and the bees were everywhere.

A handful of other perennials are still in bloom. The pink turtlehead (Chelone lyonii) is holding its own in our lower shade bed even as the rest of the bed turns an inexorable yellow. The two sidewalk beds closest to the house are still a pleasure to look at. In the ‘inner’ bed, a white David’s phlox is in its second month of bloom and a Persicaria ‘Painter’s Palette’ has both the beautiful, multi-colored foliage it has displayed all season plus, now, an abundance of pink spikes.

In the ‘outer’ sidewalk bed, a clump of balloon flower (Platycodon grandiflorus) eaten down by deer earlier in the season is making up for lost time by flowering long past its usual date. Because we’ve not yet had a hard frost, the cleomes are still in bloom, and probably prolifically self-seeding next year’s crop. Also, there’s a clump of pinkish-white Japanese anemone that, left to its own devices, would take over the garden. We allow this one clump to remain because of its reliable September flowering. To keep it in check, we spend much of the spring and summer pulling out its never-ending runners.

The single most striking perennial in the outer sidewalk bed is a Eupatorium ‘chocolate’. Joe Pye weed never was more elegant than this. The foliage is indeed a purple-chocolate brown, but the bloom – huge puffy heads of tiny white flowers – is remarkable. We’ll have those floral clusters until early November.

Finally, although a shrub rather than a perennial, our Daphne ‘Atlantica’ is putting on an autumn show. We nearly gave it up for dead after last winter and it spent much of the spring and summer staked in hopes of strengthening its trunk. Whatever we did worked: the plant roughly tripled in size over the course of the summer and then began putting out fragrant white flowers. It is still going strong.
Posted by The Principal Undergardener at 10:52 AM No comments: