I have had a very active May, with lots of exciting road trips.  I’ve been as far afield as Maine and as close as Waltham (just 22 miles away).  One included a stop for ice cream but what ties together all of those journeys was that they were built around buying lots and lots of perennials.

It was two years ago this month that Betty and I began building our new garden.   We moved into our ‘dream retirement home’ in April 2015 and promptly discovered we had a terrific house, but not a square foot of arable land around it.  Faced with such a problem, most homeowners would arrange for a few truckloads of topsoil to be brought in.  It would be placed, two or three inches deep, on top of the ‘builder’s crud’; grass seed (or sod) would be spread; and a few pretty shrubs would be added along the foundation.  Problem solved.  Time to fire up the grill.

We are not ‘most homeowners’.  Betty is a very serious and highly dedicated gardener, and she had a vision for a garden.  Her vision did not include any grass.  It included trees, shrubs, and perennials – very nearly all of them ‘natives’.

And so our first act as new homeowners was to hire a landscape contractor to dig out the top 18 inches of ‘builder’s crud’ on the front half acre of our acre-and-a-half property.  Nine hundred forty-seven cubic yards of lifeless dirt and rock was hauled away, to be replaced by 950 cubic yards of screened loam.

That first year was dedicated to finding and planting a dozen good-sized native trees, a few dozen native shrubs, and 1800 bulbs.  (We originally intended to move more than 200 perennials from our previous home, but moles and voles had other ideas.  Roughly thirty plants survived the winter.)  In our second year, we added a few more trees, another few dozen shrubs, 1400 more bulbs, and a few hundred carefully selected perennials, including 120 heuchera and tiarellas that had graced a landscape exhibit at the Boston Flower and Garden Show.

You might think that our garden would be fully populated after two years of planting.  Nope; not even close.  This is the year of the perennial (plus a few more trees and shrubs).  Thus, the need for road trips.  Our first one was a warm-up.  Northborough is a leisurely 45 miles from Medfield and, in early May, we visited Bigelow Nursery and brought home a Cornus mas (Cornelian cherry) and a Bartzella intersectional peony that blooms yellow.

We next set off for a trip to the Middlesex Conservation District plant sale in Littleton, Massachusetts, where we brought home three crabapples trees, 25 strawberry plants (yes, strawberries are natives), and another dozen miscellaneous native perennials.  A week later, we were at the Grow Native Plant Sale in Waltham, where we filled our car with barren strawberry (a ground cover), monarda (bee balm), and buttonbush, among many other purchases.

Next, we headed to Log Cabin Perennials in East Overshoe, Maine (all, right, Saco), where Kenneth Rice sells more than 300 varieties of perennials in one-gallon pots for the unbelievable price of five dollars per plant.  It was pouring rain that morning, but we packed 30 specimens into the back of our car.  On our way back to civilization, we made a detour to a place called Kane’s Flower World in Danvers, Massachusetts, where Betty made use of a gift certificate she had won in a drawing five months earlier.  Six more perennials were crowded into the back seat (we also stopped for the aforementioned ice cream).

Last Thursday, we set off for Bay State Perennial Farm in West Bejesus, Massachusetts.  Betty has been getting emails from Bay State since the invention of the internet, and because it was raining and 47 degrees, we decided it was a perfect day to see central Massachusetts. Bay State has an impressive plant list, and we packed the car with finds such as Monarda ‘Cherry Pops’, Geun rivale ‘Flames of Passion’, and Nepeta nervosa ‘Cat’s Meow’.  No, Betty does not purchase plants based on cute or alluring names, but it’s intriguing that few plants that come home with us are ever labeled ‘species’.

Any trip beyond the Charlton Rest Area on the Mass Pike inevitably includes a stop at Andrew’s Greenhouse in South Amherst.  Andrew’s has been Betty’s go-to place for annuals ever since she discovered it a decade ago, and each year we make the pilgrimage two or three times in May and June.  It is also a major source of perennials, and Betty packed the car with Veronica, Echinacea, Guara, Chelone (turtlehead), and Achillea (yarrow); plus most of the vegetables we don’t plant from seed in our garden.  Between the two stops, we stuffed 38 perennials and an untold number of vegetable and annual six-packs into a Prius with a rated capacity of thirty perennials.  I only needed to move the flat of vegetables when I had to shift

Amazingly, we finished planting all of these perennials this morning.

The topmost photo of this essay was taken at noon today (May 29).  I’m calling this the ‘before’ picture.  Over the course of the summer, as the plants bloom and grow, I’ll update the sequence.

The garden is beginning to show its true potential.  What were long expanses of mulch now has clusters of green that will burst into color with the advent of summer.  Next year, those plants will self-seed, spread by runner or rhizome, or otherwise fill in their allotted spaces.

Me?  I’m waiting to find out where the next road trip will take us.
Posted by The Principal Undergardener at 6:22 PM No comments:

For the past three days, I’ve been in Richmond, Virginia, where my wife, Betty, is attending the National Garden Clubs Inc. Convention.  So that we’re clear on this, I have no function at this event other than as one of the crowd extras (‘man in blue blazer drinking white wine’).

Everyone knows why garden clubs exist.  It is to do horticultural good in a community.  Clubs engage in civic beautification and other acts of public service.  They educate their members and foster friendships.  (And, in the kinds of gardens clubs about which I write, their members solve or commit the occasional crime; up to and including murder.)

OK, local garden clubs make sense.  But why should there be a national organization for garden clubs?  The answer, in a word, is education.  There are four cornerstones on which all garden clubs rest: they are environmental, garden study, landscape design, and floral design.  For each one of these areas, there is a national group that designs and updates the curriculum for schools in each of these disciplines so that a club member attending Landscape Design School in California covers the same concepts as someone attending in Maine, but tailored to the special needs of each region. 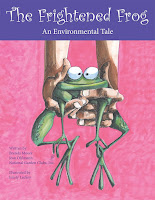 There are also national projects.  If you’ve seen a book called, “The Frightened Frog”, you should know it was created under the auspices of NGC and released in 2015 to provide environmental education to children from roughly ages four to nine.  Rather than just scaring the bejesus out of kids (the usual way environmental education works), this beautifully illustrated and superbly written book tells a story with an environmental message.  This year, another book, “The Saved Seed” will use the same approach.

There are roughly 600 attendees here in Richmond.  They come from every state, as well as Central and South America.  On the surface, the purpose of the convention is to elect a new set of officers for the coming two years, to pass out awards, and to honor an interesting set of not-universally-known people from the world of horticulture and the environment.

The election, as with most such organizations, is a foregone conclusion.  The lone nail-biter is who will be elected Fourth Vice President.  That person then begins an apprenticeship that deposits them into the President’s chair eight years hence.  I’ve had the pleasure to get to know Sandy Robinson, whose term as NGC President coincided with that of Betty’s as President of the Garden Club Federation of Massachusetts.  As Sandy can attest, the President’s “chair” can more likely be described as Seat 14C on a red-eye flight from Albuquerque to Raleigh: the President’s role is to see and be seen, all the while pressing an agenda.  Last evening, I met Nancy Hargroves, the incoming President.  I wish her all the best and an unending stream of complementary upgrades.

The real purpose of any convention is to bring together people to exchange ideas, and to put faces on telephone voices and emailed communications.  Human nature makes it much more difficult to think poorly of someone you have met and shared a glass of wine with.  (A moderate amount of wine is being consumed in Richmond this week.)  The 52-page NGC program lists dozens of committees meeting to discuss specific topics.  As this is written, Betty is listening to a beleaguered gentleman by the name of Dave Robson explain to an angry, pitchfork-wielding mob how the new "Handbook for Flower Shows" is a marked improvement over its predecessor.

Having been on stage to accept a clutch of national awards bestowed on the state, Betty will have two additional minutes in the spotlight tomorrow morning as she delivers a succinct report to the convention on what the Garden Club Federation of Massachusetts accomplished under her administration.  As it turns out, the Federation has done much good while she has been its head, and she has much of which to be proud.  But if she goes over her allotted two minutes, she still gets ‘the bell’, just like everyone else.


That’s the way it is in the garden club world.
Posted by The Principal Undergardener at 10:10 PM No comments: