Winter May Be Coming

I cannot remember a more pleasant autumn.  The jet stream spent the month of October touring Quebec and the Maritime Provinces, giving southern New England the longest growing season (and warmest October) in the record books.  When you’re still picking arugula and harvesting chard the day after Halloween, it’s easy to convince yourself that winter may be postponed indefinitely.

My wakeup call that this was wishful thinking came with a thud the evening of November 11.  That night, the temperature plunged to 23 in Boston and as much as ten degrees colder in even close-in suburbs.  The thermometer on our porch read 17 degrees.  Overnight, the leaves on our hydrangeas went from green to black and that arugula turned to mush.

I am not by nature a procrastinator (my wife’s laughter at this notion notwithstanding) but I had, quite justifiably, been putting off a lengthy list of end-of-season chores because, well, I thought we might still need those 280 gallons of rainwater in our rain barrels and cat litter jugs.  Imagine my surprise when I found the water in those jugs was frozen solid and it took a hammer and chisel to break the ice in the rain barrels.  Three sets of outdoor hoses were also frozen; fortunately, none had split.

I had also deferred picking up the various ornaments that populate our garden on the grounds that they are attractive and bring joy to our lives. They are also quite heavy.  My procras… excuse me, my reasonable delay in bringing them in cost a concrete turtle a leg and a fish a fin.  When I get around to gluing them back together, they’ll be just like new.

It took ten days (you may remember it rained a lot), but the barrels eventually were emptied and bleached.  A few days later, the newly sanitized jugs went into winter quarters in the basement.  I even helped take apart the summer container gardens despite my pointing out that several of them still had guara and salvia in bloom.

We don’t rake leaves as a rule.  Rather, we treat them as a winter mulch for plants and home for beneficial insects.  However, Betty pointed out that the maple tree at the front of our property had dropped all its leaves on the gravel, off-street parking pad.  Moreover, the wind had blown those leaves into two-foot-deep drifts along a rock wall.  I said they would be much lighter and easier to move after they dried for a few more weeks.  The day after Thanksgiving I was handed a rake and a tarpaulin.

I still am waiting on putting out the driveway markers.  You see, there’s a La Nina setting up shop in the Pacific Ocean.  The Old Farmers Almanac predicts seasonal temperatures with above-average precipitation, but NOAA just released a map showing New England with a 40% chance of warmer than normal temperatures.  But a Boston-area meteorologist and blogger named Dave Epstein points out that when November is colder than average, the odds of a snowier than average winter…  You get the idea. 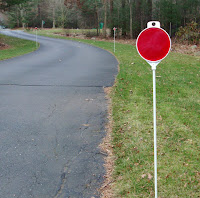 I think I’ll wait until these forecasters reach a consensus.  Then I’ll decide when it’s time to put out the markers.  Unless, of course, the ground is frozen, in which case I’ll have to find the metal stake I use to punch through the soil.  And the mallet.  I think I’ve misplaced that, too.
Posted by The Principal Undergardener at 9:43 AM 1 comment: