The Principal Undergardener usually writes funny, upbeat items about garden-related slices of life.  I promise to return with something humorous in a few days but, this morning, I have something festering in my mind that needs to get down in words (and, no, it has nothing to do with politics).
It is a tale of a wasted opportunity on a vital topic.
I have the pleasure to accompany my wife to many garden club events around Massachusetts.  Clubs enjoy meeting her and Betty relishes the chance to take a few minutes to speak about what the state Federation is doing, especially by way of education. 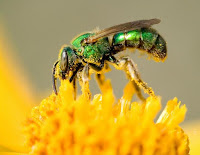 A week or so ago, we were at a joint meeting of two clubs.  A very nice garden center kept its doors open and provided a great meeting space. Because the event was well publicized, it drew a crowd of more than 75 people, many of them non-garden-club-member guests drawn by the topic at hand.  (I have purposely omitted names and details.)
The topic of the evening was bees and the danger they face.  There were to be two presentations.  One of them was from a professional beekeeping service.  The other was a librarian with a keen interest in the subject.
The beekeeping company was not a guy with a truck and some hives.  Rather, it is a firm with a presence in multiple cities.  Its founder is a behavioral ecologist who has written a lucid book on bees, and the company is quite adept at generating positive publicity for itself.
The speaker, according to the garden clubs’ flyer, was to have been the firm’s marketing director.  For whatever reason, she wasn’t there.  Instead, two of the company’s employees made the presentation.  What followed was a disorganized and poorly presented program that was astonishingly short on facts.

The two presenters were both in their early twenties, and I’ll call them Ken and Barbie.  Ken gave part of his presentation not noticing he was standing between the projector and the screen.  He delivered half of talk directly to Barbie, who was standing to one side.  He gave the other half to the screen, where he read slides word for word.  He occasionally glanced at the audience, which noticed the absence of eye contact.
Ken would go backwards in the presentation looking for a particular slide.  He also paused to speak about a particularly ‘cool’ graphic done by the company’s ‘awesome’ in-house graphic artist; then apologized because the graphic wasn’t really large enough to be seen beyond the front row.  He also delivered his talk with one hand in his pants pocket, which would ordinarily be grounds for criticism (it telegraphs to an audience that you’re not serious) but, given the rest of his transgressions, barely matters.
Barbie was better, but her part of the talk comprised about 15% of the program.

Poor presentation can ruin a program, but avoiding speaking about the ‘elephant in the room’ is unforgivable.  The presentation was devoid of discussion of neonicotinoids in general; and clothianidin, imiadcloprid, and thiamethoxam in particular.  Instead, according to Ken, colony collapse occurs because “bees just wander off”.  The absence of such a discussion was puzzling.  It lead one person with whom I spoke after the presentation to wonder aloud if the beekeeping organization receives funding from insecticide manufacturers.
Maybe the most bewildering slides was a list of nectar/pollen plants available by month.  I believe there was a single plant listed for September with nothing thereafter, and Ken allowed that, “after August, there isn’t much food out there for the bees.”  When questioned about the chart, Ken said the information in would be updated when other sources were verified.  (Our garden has active bees and food plants for them into November; I offered to supply Ken with my plant list.)
* * * * * 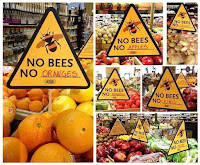 It was, in short, a wasted opportunity.  The question I keep coming back to is, ‘why’.  There are two possible answers.  The first is that Ken and Barbie were last minute substitutes who had never presented publicly and were unfamiliar with the program they were supposed to give.  That’s the charitable explanation.  The other is that this beekeeping organization considers garden clubs secondary or tertiary audiences that aren’t worthy of sending in the ‘big guns’.  If so, they blew it.  In the Q&A session that followed, it was members of the audience who asked the tough questions, citing specific chemicals and industry practices in detail.
The librarian’s presentation, on the other hand, was well researched, carefully thought out, and well-presented  – in short, infinitely better than the ‘professional’ one the preceded it.


A reader might wonder why, instead of venting in a blog, the Principal Undergardener didn’t express his thoughts directly to the beekeeping company.  I did.  I sent a detailed critique to the company’s founder, chief scientist, and marketing director the day after the presentation.  I heard back… nothing.
Posted by The Principal Undergardener at 10:57 AM No comments:

The Huddled Masses, Leaning Toward the Sun

They are camped out around our home, unwilling refugees, far from their tropical and subtropical origins, gathered by windows and leaning toward a feeble sun for sustenance. They huddle together to preserve precious water in a house where the humidity is in single digits.


What we do to our houseplants. We take growing things whose ancestors never experienced a frost and transport them to environments where, for six months of the year, all that separates them from death by frozen capillaries is a pane of glass. And all this for…. What?
Why do we have houseplants? I typed that question into Google, ordinarily a bastion of reason and well-marshaled information. The first response was a query right back at me: ‘How can I get rid of gnats?’ Not ready for a Socratic dialog so early in the morning, I declined to provide an answer. Five pages of scrolling later, I had not found any erudite responses from horticulturally-inclined sociologists, although I uncovered an online survey indicating that our home’s houseplant population puts us dangerously outside the bell curve (the average number is five).
And so, I am left to come up with my own answers. The first one is obvious: they’re green and they sometimes flower. It’s February in New England.  The world outside my window this week is relentlessly brown. Who wouldn’t want to have something nearby that reminded us that winter is not some Game-of-Thrones-style permanent condition?
Another answer is that houseplants are undemanding. Water them once a week. Check them for insects (including, yes, gnats). Re-pot them once a year. Compared to your average pet, they’re self-sufficient. My aunt kept a snake plant (Sansevieria trifasciata) in a darkened hallway that, to the best of my knowledge, was never watered, only dusted occasionally. It lived for decades.
A third answer is that houseplants are your friends.  We have deployed a small army of Peace lilies (Spathiphyllum) around our home.  They not only produce a handsome, long-lived flower, but they also cleanse the air of multiple toxins.  Many other houseplants perform similar functions.
Plants can surprise you. We have friends who have decamped for South America for a lengthy vacation.  We agreed to ‘babysit’ two of their orchids.  Our friends arrived for dinner in late December bearing the two biggest plants I have seen outside a botanical garden.  For two weeks, those orchids simply occupied space in our home; one of them hogging an entire twin set of casement windows.  They were nothing but greenery.  Then, one morning two weeks into our plant-sitting exercise, we awakened to find our guests in spectacular blooms of pink and white.  They’re still brightening our home and are welcome to stay as long as they wish.
Finally, plants get to become family. We have two wonderfully colorful crotons that has been around so long they are practically family retainers.  Our various bougainvillea have been in residence for so many years that I can predict their flowering cycles to within a few days. Betty was given a ‘bunny ears’ cactus (Opuntia microdasys) almost a decade ago.  Every year, it rewarded us with a new ‘ear’, growing like an oblong floor of an oddly-shaped building.  When the cactus broke over under its own weight, Betty thought it might be a goner.  Instead, the area from which it broke produced two ears, each of which is now happily adding to the plant’s bulk.


So, why do we have houseplants?  I think it’s because they’re a year-round reminder that, no matter our station in life, we all ultimately came from the land.  A few generations ago, our forebears farmed to survive.  Today, we exchange our labor for money and, if we ‘farm’ at all, we call it ‘gardening’ and we do it for pleasure.  In short, houseplants keep us rooted.
Posted by The Principal Undergardener at 9:52 AM 1 comment: