All Gardening Is Local

(Note:  In her October, 2010 newsletter, Janet Macunovich addressed the issue of burning bush as being regionally invasive and gave credit to 'Massachusetts Master Gardener Betty' for calling attention to the subject.  Please read this entry with Ms. Macunovich's subsequent change of opinion in mind.)

There are some truly great gardening speakers out there, and one of them is Janet Macunovich.

Ms. Macunovich has been a horticulturalist for close to 40 years and has nine books to her credit. When she stands up to give a talk, she unwinds a long story – or series of stories – that resonate with her audience. She delivers a truckload of information along the way and has the presence of mind to provide her audience with an outline that can run five pages.

She is a classic, ‘first-person’ speaker. By the time she has finished, you know as much about her family as you probably do about some of your neighbors and you have gotten a time-lapse view of her back yard that stretches over two decades. She is also a ‘first-name-familiar’ speaker. When discussing projects she has undertaken for clients, it’s never ‘a property in (name of upscale community)’, it’s ‘Bob and Millie’ or ‘Jerry and Judy’, regardless of whether it’s a split level on a treeless lot or an estate.

Her presentations are also rich in photographic support. This is in part because her husband is an accomplished photographer, but also because Ms. Macunovich recognizes that, especially in landscape renovations, photos fill out a story and leave a more indelible impression on an audience.

I had the opportunity to hear Ms. Macunovich twice in the past few weeks. She spoke twice in the same day on two topics and, to her credit, there was remarkably little overlap between her two presentations. It’s the sign of a great speaker when they can be as bouncy and energetic at seven in the evening as they were at ten in the morning.

But I also heard a loud, clanging noise at two points in her talk. The first was when she said that it was too wet to plant xeric gardens in New England. The second was when she dismissed concerns about burning bush (euonymus alatus) as an invasive species.

Janet Macunovich comes from Michigan and most of her projects are in that region. She also has some clients in the Boston area, including a wonderful garden on Beacon Hill. But she has chosen to speak to groups around the country and, on this day, her audience was comprised of New Englanders.

I could almost let the first comment pass. Perhaps, by ‘xeric garden’ she had in mind strictly cactuses and yuccas and, if that were the case, then yes, New England is a poor site for such things. But ‘xeric’ means ‘dry’ and not ‘arid desert’. One of Betty’s most requested subjects is ‘water-smart gardening’ and a major component of that talk is xeric gardens which, to her, means a garden that, once established, needs no water beyond what Mother Nature provides. In an era of dwindling water resources, homeowners need to think before they plant.

We have a ninety-foot-long demonstration garden in the front of our property that is build around xeric gardening principles. Alas, for all of their admiration, none of our neighbors have taken us up on our offer to help them replicate our project. 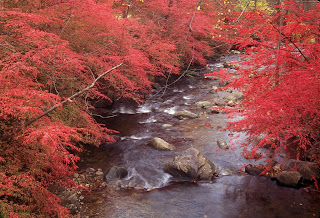 However, calling concerns about burning bush ‘overblown’ was a case of failing to understand what is being wrought around New England. As trees lost their leaves this month, the extent to which euonymus alatus has insinuated itself into the forest floor is too visible to be ignored. Driving the back roads of Medfield, Dover, and Sherborn, the distinctive pale red shrub is everywhere it shouldn’t be.

Burning bush, a native of China and northeast Asia, has a root mat out of science fiction – a thick, fibrous tangle that captures every ounce of moisture and allows nothing else to grow. There were three burning bushes on our property when we moved in. Ten years later, I am still digging out plants that have sprung up from the pieces of root left behind.

Most burning bush comes from seed. Birds eat the shrub’s berries though they offer no nutritional value. The seeds pass through the birds and grow where they fall. Perhaps in Michigan the climate is wrong for burning bush to spread unchecked. It certainly isn’t the case here. Massachusetts and Connecticut both have the plant on their invasive species list and ban their sale.

The lesson I take away is that all gardening is local. Ms. Macunovich is a terrific speaker and writer and she has a lot to offer an audience. But, when a lecturer ventures outside of his or her home turf, a little research is in order. I don’t think that’s too much to ask.
Posted by The Principal Undergardener at 10:56 AM No comments: