When we moved into our current home eleven year ago, the then-four-year-old property had roughly 10,000 square feet of lawn. Today, the lawn is barely 5,000 square feet. Therein lies a story. 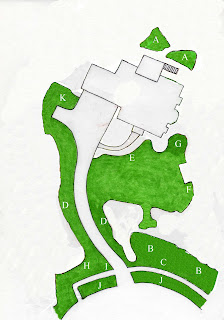 The diagram at left shows the extent of grass in 1999. We bought the property because of its unique attributes; it is part of a neighborhood yet it is also secluded from that neighborhood by trees and a long driveway. It is 220 feet from the street to the house and a nice copse of trees was left to provide a green barrier at the front of the property.

All in all, having just 10,000 square feet of grass on a 1.7 acre property (70,000 square feet) would seem already to represent a degree of environmental consciousness. Several of our neighbors – with similarly sized lots – have lawns that are upwards of 40,000 square feet. We, however, immediately began looking for ways to pare the lawn (and the time spent mowing it). The second diagram, below, shows the reductions made over the past 11 years. Here are some notes about what happened to the rest of that grass.  The letters in the plot plan correspond to areas being discussed.

The back ‘yard’ of the property ought never to have borne any grass. From the rear wall of the house the land slopes down at a 15% grade toward a pond 100 yards away. We have heard, anecdotally, that the builder initially sprayed grass seed and that, briefly, the back of the property was all grass. But rain, snow and gravity caused most of it to be washed into the woods behind us by the time we moved in. The home’s first occupants tried all manner of fixes, including mulch and perennials. By 1999, there were only a few remaining area of grass (A). We effected a permanent solution by terracing the back area via a series of rock gardens. The grass was removed to extend those rock gardens across the entire rear of the property.

At the very front of the property, the builder incongruously elected to put in a 30-foot-deep strip of grass (B) between the sidewalk and the woods. The grass benefited no one. It was invisible from the house and the neighbors could care less. That was the first grass to go, removed to be turned into a long shrub bed. All that remains of the original grassed area is a narrow, undulating turf border that serves as an accent. This year, the shrub bed expanded by about 100 square feet with the removal of a Norway maple (C).

We began nibbling away at the grass along the driveway (D) almost from the day we moved in. Two existing perennial beds were enlarged, each time shrinking the grass area while providing more room and sunlight for the growing perennial collections. Similarly, the outer sidewalk bed (E) was nearly doubled in width, allowing for a more dramatic display of plantings while further reducing the volume of grass in one of the only areas of the property to received all-day sun.

One of the most significant reductions in lawn came from the creation of Old Stone Bed (F). The original tiny, rectangular garden (built in a raised bed bordered with paving stones), discernible in the top diagram, made no sense. It was quadrupled in size and its contours made more interesting. The paving stones were removed but the name stuck. At the same time, ‘the Cove’ (G) was created by narrowing the opening of a bib of grass leading to the Hosta Walk.

The Butterfly bed (H) has been deepened and a triangular section of lawn (I) removed and replaced with ground covers and spring bulbs.

The two most recent lawn reductions; the Xeric garden (2007-2009) (J) that replaced the utility easement, and the ‘Wisteria’ bed (2009) (K) by the driveway turnaround, have already been commented on at length in recent posts.

What is left is a very manageable area of lawn that can shrink only with difficulty. The expanse of turf in front of the house covers the septic field. Planting that area is not considered advisable. The ten-foot-wide strips of grass along either side of the driveway provide a landing point for winter snow – a not insignificant consideration in New England.
Posted by The Principal Undergardener at 7:18 PM No comments: 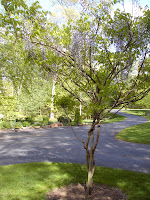 I wrote a few months ago about the demise of the wisteria ‘tree’ that had once graced an otherwise unremarkable corner of our lawn. The earlier incarnation of the site is shown at right.  Several readers asked, ‘Well, what replaced it?’ The answer can be seen immediately below.   (You can double click on any of the photos on the post to get a much more detailed look at individual plants.) 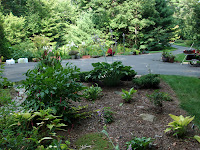 Let’s start with the site – a roughly 15’x15’ space where our driveway, driveway turnaround, and nursery bed meet, backed by the woods that separate us from our neighbors. It gets very good light from dawn until noon, after which the pines and oaks behind it put the area in shade for the balance of the day. The location remained lawn for so long because of the reality that snow from the two driveway pieces has to be pushed somewhere. Tall shrubs would be problematic.

We took up all the grass except for a three-foot wide strip that serves the dual purpose of a walkway around the back of the nursery bed and a visual divider for the two halves of the new bed. The soil was dug down twelve inches and heavily amended. The topsoil in a foot-wide strip adjoining the driveway was removed to a depth of fifteen inches and replaced with rocks. The rock border, in turn, helps prevent ponding on the driveway during rainstorm and snow melt.

We chose six low-growing shrubs to anchor the site: three very hardy ilex that could withstand having snow dumped on them and three miniature kalmia (mountain laurel) that, while technically within the snow-throw zone, are far enough back to be protectable. 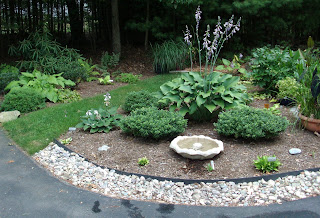 The balance of the bed is planted with perennials, the centerpiece of which is a hosta ‘Krossa Regal’ that when in flower as it is now, stands more than four feet tall. This particular hosta outgrew a pot that had been its home for several years. There are ten other (morning) sun-tolerant hostas including a collection of miniatures that will eventually soften the rock border. Other perennials include tiarella (foam flower), ferns and a nicely mounding aruncus; one of the few that look good after they’ve bloomed.

The accompanying photos show a young bed. Most of these plants have been on site for a year or less. A photo taken a year from today would show a few pockets of mulch; one taken in August two years hence would show no mulch at all.
Posted by The Principal Undergardener at 1:50 PM 3 comments: