Four and a Half Minutes of Fame... or maybe Flame

Here is the segment as it aired on November 17:  http://medfield.tv/video/old-house-mass-hort-segment

Sometime in late October or early November, you’re going to turn on This Old House and see homeowner Rebecca Titlow walking with TOH’s landscaping guru, Roger Cook. Rebecca is going to say that she’s been thinking about the need for a vegetable garden at the 1720 house in Bedford that is the subject of the fall season of the venerable PBS program.  Rebecca will say that she wants her daughter to know where food comes from.


And then Roger will say, “Well, Rebecca, that’s why I’ve brought you to see this great vegetable garden at the Massachusetts Horticultural Society.  And here’s Betty Sanders to talk to us about vegetable gardening and raised beds and a lot of other great stuff.”  And Betty, who just happened to be doing some weeding, stops what she’s doing and says, “Hi, Roger!  Let me show you around!”


Except that Roger didn’t say ‘Horticultural Society’.  He said ‘Historical Society’.  So the director tells Roger and Rebecca to go back to the top of the garden and have that conversation all over again.


Welcome to Elm Bank on the second hottest day of the summer.  The temperature is 98 degrees, the humidity is oppressive, and there is not a cloud within 300 miles.  The cast and crew of This Old House have come to film a segment about vegetable gardening for their new season, which starts October 6.


Mass Hort is thrilled to be asked to participate and Betty is pleased to show off the stunning garden she designed and maintains.


The problem is the weather and how it affects the brains of everyone involved.  The segment director has in mind a four-and-a-half-minute-long tracking shot: one continuous shot that starts with that conversation about knowing where food comes from and then follows Rebecca, Roger and Betty through the garden.  It’s a great concept and one that can impart a lot of information with high-impact visuals.


Except for the heat and the relentless sun.  Instead, each take is a learning experience in how the human mind and body can be subtly altered by the elements.  Betty can’t come up with the word ‘nasturtium’.  Rebecca can’t remember the great question she was going to ask.  Roger flubs the name of some common vegetables.  And the director keeps calling everything ‘cabbage’.


Filming was supposed to commence at 11 a.m. and last about an hour, including set-up.  At 10 a.m., the director called to say they were running late and wouldn’t be at the garden until noon.  The first cars arrived at 12:45 and filming actually started at 1:30.  It went on, take after take, until nearly 4 p.m.


Finally, the director was satisfied.  It wasn’t that there had been a single take in which everyone got their lines right.  Rather, I suspect it was that there was a sense that with two and half hours of takes, all the correct information was in there, somewhere.  Some overhead shots were taken from a tall ladder, and then they were done.


My role in all of this was strictly moral support.  If my wife was going to spend an afternoon broiling in the sun, I could at least say I was there by her side, even if ‘there’ meant I was under a nearby tent, socking away bottles of well-chilled water.


I came away with a respect for This Old House and those who agree to be part of it.  It’s a reality show and it’s entertainment, but this isn’t Snooki dumping on her housemates.  Betty had four and half minutes to impart a wealth of information and show viewers that vegetable gardens don’t have to be dull rectangles.


I don’t know if This Old House draws the same-sized audience as it did back before the advent of 500 channels of television.  I hope a lot of people see this segment.  Despite the relentless sun and the heat, it was a class act.
Posted by The Principal Undergardener at 5:22 PM No comments:

Two weeks ago, I wrote of working in the inner and outer sidewalk beds of our garden - the seemingly never-ending series of small chores that are part and parcel of gardening.  At the time I wrote that piece, I perceived the garden as being at or near its seasonal peak.  Boy, was I wrong.

This morning, I walked out to get the Sunday newspapers and was confronted by the image at left: a clutch of two dozen yellow-white lilies nearly five feet tall - taller than the oyydendrum growing next to it.  Framing the lilies, a blaze of red/purple astilbe.  Neither plant was in bloom last week.  It's astonishing what can happen in a garden in less than two weeks. 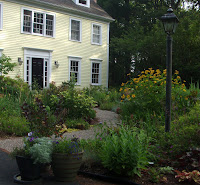 The balance of this relatively small garden area is now in its full mid-July bloom cycle.  The second photo, looking up the front sidewalk, shows the joy of texture and color (double click on any photo to see it at full size).  On the left side of the walkway, there's persacaria 'Painters Palette' and 'Red Dragon' that are thriving and close to four feet high.  Next to them is a yellow-gold variegated artemisia that requires constant attention to keep it from taking over the area.  On the right side of the sidewalk is a golden helenium that, for the monent, dominates the site.  Closer to the camera are sedum and huechera.

Farther up the sidewalk, white and purple Stokesasia (Stoke's Aster) have come into bloom and, beyond them, coreopsis 'Moonbeam'.  A week ago, there was only greenery.  Long blooming purple geraniums are in the foreground, together with the pygmy pine planted earlier this month.  Both the Stokesaia and coreopsis will be cut back after their initial blooms.  We'll get a few reblooms from the former perennial but the coreopsis will put on another, shorter display in September.

Looking away from the house along the perimeter of the outer sidewalk bed, a series of small pleasures show themselves.  There's a striped tiger grass and a Weigela 'My Monet'.  The tall purple plume is a thalictrum rochebrunianum 'Lavender Mist'.  We've continued inching out into the lawn to accommodate the maturing (and spreading) perennials.  Now, as we add more structure to the site, the bed needs to expand to allow for things like our pinus sylvestris 'Hillside Creeper' to more fully establish itself.
Perhaps most remarkable in all of this is that the elements of the bed's late July bloom cycle are already in place.  The hibiscus is showing buds and the Belamcanda Chinesis (blackberry lily) has grown to nearly five feet in anticipation of its own display.  There are tiny panticles on the oxydendrum that will become vividly white by month's end.
Posted by The Principal Undergardener at 8:48 PM No comments:

﻿﻿﻿﻿Back in September 2009, I wrote about a phenomenon around our garden called ‘The Rule of Three’ which decreed that for every plant introduced onto the property, three holes needed to be dug.  Today, I am able to report on a corollary observable fact which I call ‘The Cascade Effect’.  It works like this:

Last week, Betty was at the American Hosta Society convention.  There, in an act of love and thoughtfulness, she bought for me a hosta called ‘Sergeant Pepper’.  The hosta itself is a delightfully variegated yellow plantain lily of considerable distinction, but its greater worth is in its name: the eponymous album is my favorite of all time.  However, the hosta did not come with any tag indicating the two most important facts needed before it could be planted, namely, how large it will eventually get and how much sun it will tolerate.
We have a home library that has marvelous horticultural resources, but there are more than 3,000 registered varieties of hosta and Hostapedia, the definitive work on the subject, is not among our collection.  An internet search was needed.
We had also recently been to Weston Nurseries which was holding its annual ‘customer appreciation event’ in which ice cream and pizza are liberally dispensed (plus discounts on plants and garden equipment) and among the things we brought home a Pinus strobus ‘Pygmaea’, a small and unusually shaped, slow-growing pine that we agreed would add needed structure to the inner sidewalk bed.
And so we went looking for just the right spot for our new pygmy pine.  As we walked the bed, the Cascade Effect began.  Though it had nothing to do with finding an appropriate site for our new evergreen, the first thing Betty noticed was that some Solidago (goldenrod to the rest of us) had insinuated itself in among our Siberian iris.  We removed it.  That led to her noticing that the last of the peonies had passed, and so the stalks that had held the peonies needed to be trimmed down to better shape the plant for the summer.  That was done.  Removing the peony stalks revealed that a few Allium, long-since past bloom but still with attractive umbrels atop four-plus-foot stalks, had broken over.  The ones with broken stalks were carefully culled.
The removal of the one set of stalks revealed spent bearded iris, which needed to be cut to the nearest leaf nodule and that action brought into sharp focus that several dozen native Columbine had formed seed heads that were about to populate the garden with unwanted progeny.  And, speaking of progeny, the ferns were rapidly overwhelming our stand of Eupatorium ‘Chocolate’ and needed to be brought back into line.  (Please keep in mind that all this activity is in one garden bed of less than 500 square feet.)
The Cascade Effect continued: spent salvia blooms were trimmed back severely and the height of later-blooming perennials were trimmed back to promote stronger growth.  The list goes on.
At last, the perfect spot was found for the pygmy pine.  The location, of course, was already occupied by a long-blooming geranium which needed to be relocated to extend a ‘river’ that flows through the bed.  The geranium was duly moved.  Also, a nearby Stoke’s aster, though not technically critical to the success of the new planting, was dug up and potted as a precaution.  Compost and mulch were brought in and, a mere two hours after the search for a site began, Pinus strobus ‘Pygmaea’ found its permanent home.
What has still not found a home, at least as of this writing, is Hosta ‘Sergeant Pepper’.  It still resides in its pot, awaiting that internet search to determine where on the property it will be happiest.
Posted by The Principal Undergardener at 8:36 AM No comments: