What took three and a half days and two dozen people to build was dismantled in a few hours this morning. Paul Miskovsky’s exhibit at the Rhode Island Flower Show (and, for that matter, each the other entries) was reduced to a gigantic pile of dark brown mulch by a small crew and some large pieces of equipment.
A flower show exhibit is a transitory dream. It is intended to exist for a few days, then to disappear, leaving only a pleasant memory of what was. If it is executed properly, a landscape exhibit will please almost everyone who passes by it. Many will pick up the brochure outlining the exhibitor’s credentials. Some will linger, hoping to speak with the garden’s creator. And a few will be sufficiently moved by the landscaper’s vision to say, ‘let’s talk…’.

Landscaping is Paul Miskovsky’s livelihood. Shows such as the just-concluded Rhode Island Flower Show and the upcoming Boston Flower & Garden Show are an important facet of his business. No one wakes up one morning and decides that they ‘need’ to scrape their property bare, re-contour the land and install a series of garden rooms. Instead, they visit friends’ homes and see things they like or they go to shows and get stopped in their tracks by a stunning exhibit. Miskovsky’s vision was indeed capable of causing jaded flower show-goers to backtrack, circle the exhibit and begin talking excitedly to one another. (It took the blue ribbon for best large landscape at the show.)

When Betty and I arrived at the show late Sunday afternoon, we found Paul in discussion with a couple whose appearance and demeanor intimated that, if they elected to start a landscape renovation, it would be a serious undertaking. We gave Paul a wide berth until his conversation with the couple ended with a smile and a firm handshake. It was, I hope and expect, a ritual that occurred many times over the show’s four-day run. 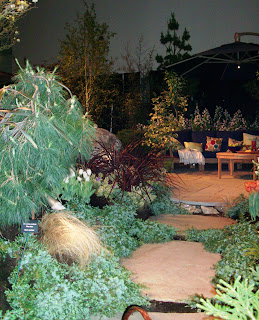 When I arrived this morning at 9 a.m., the garden still looked as it had the day before. But in less than an hour we had stripped the exhibit of more than a hundred campanula, twelve dozen painted ferns, and ten dozen tulips. The campanula, still in glorious full bloom of blue and white bells, were unceremoniously sheared of their tops and placed in boxes. They and the ferns will go into greenhouses either for clients or for the Boston Flower & Garden Show in March.

Also in that hour the stunning tropicals that had enlivened the two patio scenes were placed into climate-controlled trucks to return to the greenhouses where they have wintered. 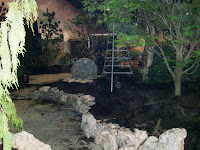 Next came the grasses, ground covers and small shrubs. It had taken nearly a day to install them. It took less than an hour to remove them and load them in racks on one of Paul’s large trucks. Before noon, the exhibit looked like the accompanying photo - stripped of everything but its trees and hardscape. We took a break for pizza, then tackled the task of tying up the branches of trees so that they could lay flat in enclosed trucks. Paul’s full-time crew were handed the assignment of pulling out the stone wall that encircled one patio and the dozens of bluestone slabs that comprised the two seating areas.

The first section of kickboard came down around 1 p.m. Paul, manning one of his beloved Bobcats, rode over hills of mulch to begin retrieving more than a dozen trees located around the 900 square foot garden. Before 2 p.m., it was all done. The garden sprang from a pile of mulch last Sunday; eight days later, it returned to that same mulch, now enriched with some fifty bags of compost used to top-dress the exhibit.

Larry LeCain, a fellow volunteer, told me as we moved rocks that it seemed sad to see the garden come to an end. I respectfully disagreed. Paul’s exhibit was a kind of Brigadoon experience; an ephemeral event that was made all the more special because it was so deliberately transient. It was created to provide enjoyment for 35,000 people in the middle of a bleak season. For a few hours, those people could shed their winter coats and smell spring. Even tough New Englanders deserve that kind of a break. It was a pleasure to be a small part of helping to provide it.
Posted by The Principal Undergardener at 5:34 PM No comments:

It was about noon yesterday afternoon that I realized I’m getting too old for this stuff. But then Paul yelled over to me and asked if I could give a hand pulling out a birch tree by its root ball. Of course I helped. And then I pulled out two more birches. After that, I moved rocks for an hour.

At least I got a neat tee shirt and some great pizza for my efforts. Oh, and a top-drawer horticultural design seminar. 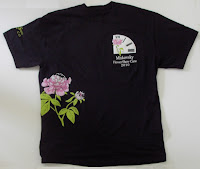 The Boston Flower & Garden Show you’ll see walking through the Seaport World Trade Center next month will be the product of a lot of very talented people channeling their knowledge of horticulture and landscape design into a few hundred square feet of eye-pleasing color and form. Assisting that talent are the efforts of several hundred people who, over the course of three or four days, physically assemble those exhibits under the watchful eye of the designer.

For the past four years, I’ve been part of crews that help build exhibits. My aching back and I are here to tell you that what looks so effortless when you admire a flower show from the aisles is anything but. It starts with a literal mountain of mulch and a stone or wooden frame (called a kickboard) that holds the mulch in place. Then, in go trees, shrubs, perennials, annuals, rocks, water and whatever else the exhibit’s designer chooses to throw in. 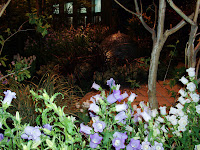 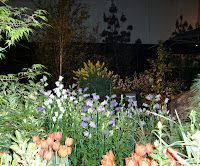 Some exhibits are carefully designed months in advance with every tulip pre-positioned. But the best exhibits, in my opinion, are just ideas in the mind of the designer until he or she arrives at the flower show site with truckloads of plants. Designers start in December or January with a greenhouse full of material to be forced into leaf or bloom. In the week or so before the material is to be moved, the exhibitor goes through the greenhouse, looking to see which plants performed best. Those plants get loaded onto a heated truck and become the focal points of the exhibit. They’re augmented by hundreds of annuals and perennials supplied by professional growers.

Landscaper Paul Miskovsky has exhibits this year at both the Rhode Island Flower Show, where I worked this week, and at the Boston Flower & Garden Show in March. He invites in friends, Master Gardeners, landscape students and even customers to help with the ‘build’, as the crash three- or four-day construction event is called. Along the way, he provides, in addition to the tee shirts and pizza, a horticultural education. 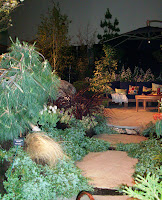 Paul also reserves the right to change his mind about things as the build progresses. When they were in the greenhouse, those three clump birches looked like they’d be in full leaf by the time the show opened. They were installed on the first day on the forks of a Bobcat. As things went in around them, their scant leaf coverage began to annoy Paul. Yesterday, the annoyance level reached full boil and the birches were yanked out by their two-hundred-pound root balls… by hand in order not to disturb completed parts of the exhibit In their place went in six huge pots of bamboo. The graceful bamboo in turn caused a dozen leucothoe to be rearranged which meant half a dozen hosta were left homeless awaiting reassignment.

At 900 square feet, Paul’s ‘palette’ in Rhode Island show is large by that show’s standard. For the Boston Flower and Garden Show, he expands to 1,080 square feet - 20% more space. He’ll also oversee the building of a 600 square foot exhibit for the Heritage Museum and Gardens and a 240 square foot parcel for the Massachusetts Horticultural Society.

If I can find a few free hours, I’ll pitch in building the Boston exhibit. Most of my time, however, is already spoken for. But more about that later.
Posted by The Principal Undergardener at 4:19 PM No comments: