We put away the garden benches yesterday. They’re handsome things: two have blacks, cast iron ends with cedar slats painted a rich green. Those benches would not be out of place in the Tuileries in Paris. The third is metal, cast in the form of a profusion of ferns. It’s in a style that reached its apex in the Beaux Arts period and, as furniture, it’s a gem; a loveseat that’s as much an objet d’art as it is a seating area. 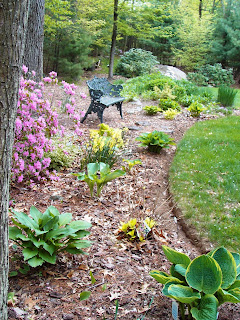 And that’s the problem. As we carried the benches from various points around the property to their resting place under the screened porch, away from the elements, I had the disappointing realization that I never sat on any of them this year. Two are strategically positioned to provide viewpoints across lawns and gardens. The third offers an elevated point from which to contemplate Danielson Pond. I never admired the vistas I helped create. I never took the time.

I know I’m not alone in this predicament. Last year we were at a wonderful garden and I admired a rustic retreat set in the woods. I asked the owner how often the little gazebo was used. The response was a rueful shake of the head. “I never have time.”

Often, it seems, such appurtenances are meant for the enjoyment of visitors. When the Medfield Garden Club held its August ‘backyard get-together’ at our home, the benches were both admired and well used throughout the morning and into the afternoon. We had the pleasure to attend a party this summer at the home of a Cape Cod landscaper, who has studded his beautiful property with seating areas large and small. When we had been his lunch guests a few weeks earlier, he allowed that he mostly enjoyed sitting on his deck during the rare times he was not working. That evening, though, his guests made use of every available space, sipping drinks and enjoying the views. 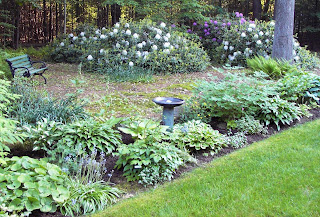 This is an admitted small sample. But I suspect that we buy ‘garden furniture’ with all of the best intentions of using it, then employ it more as ‘visual destination points’ for the eye rather than as functional places to park our behinds and relax.

Perhaps the reason is rooted in the possibility of enjoyment. If there were no bench – or gazebo or whatever – we could never sit back and taking pleasure in our gardens. The presence of the benches means that there will at least be an opportunity… if it ever stops raining (or if the mosquitoes go away, the humidity breaks, or any of a dozen reasons we give for staying indoors).

As we put away the benches yesterday, I made a vow that next year will be different. I will make it a point, at least once a week, to go out and sit on those benches. I may take a book or a newspaper, but I will also make certain that I allow adequate time to enjoy the view. A lot of effort has gone into that garden. The least I can do it see it the way visitors do.
Posted by The Principal Undergardener at 10:29 AM No comments:

Big Red Judy died last night. She froze to death, succumbing to a merciless New England autumn that saw pre-dawn temperatures at our home fall to the upper twenties. She was, by our guess, about six months old.


Big Red Judy was a coleus, a Proven Selections specimen that came to us in a four-inch pot from one of our forays to Andrew’s Nursery in late April. We were attracted by its brilliant, crimson foliage and large leaves. Even before Big Red Judy got home, Betty already knew which pot she would go into: a massive white one with bas relief garlands and swags (fortunately made of foam). Big Red Judy was accented with some trailing light blue flowers and was awarded a highly visible spot at our driveway turnaround (that’s her on the right in mid-July).

Her dainty companion gave up the ghost with the heat of August but, by then, Big Red Judy was so large that she no longer needed an escort. She was soon twice as wide and twice as high as her container, but the foliage just kept looking magnificent.

Her lone problem was that she tended to topple in the wind. In late August, Big Red Judy was moved to Rock Garden 4 where she occupied a space left vacant by the annual mid-summer disappearance of a Dicentra spectabilis, an unusually large bleeding heart. There, protected from the wind, Big Red Judy attracted even more attention from visitors, a lone burst of color in a bed that is relentlessly green at that time of the year. She was the first thing your eye saw from the deck and she glowed in the late afternoon.

Starting in the last week of September, we began bringing annual-bearing containers close to the house in the evening, shuttling them back out to their customary positions only when the morning temperatures rose above 40 degrees. That way, we figured to keep our thirty-plus containers going for another month. It worked, up to a point. Several brushes with frost were successfully avoided.

This morning, though, there was ice on the turtle bird bath. I went out to inspect Big Red Judy. Her leaves were limp and drooped, a sign that the water in the veins of the leaves had frozen. A few leaves at the bottom of the plant were firm, but it was clear that her time was passed.

We buy annuals in New England with the full knowledge that we will be able to enjoy them for six months or less. We keep them on a diet heavy with fertilizer because we know there is only season to admire their flowers, color, or texture. But there is also always next April. Big Red Judy has earned a place in our garden repertoire, along with other coleuses like Inky Fingers and Alabama Sunset.

And that’s one of the joys of gardening: meeting old friends every Spring.

Posted by The Principal Undergardener at 11:19 AM No comments:

A Pair of Autumn Gardens

It’s relatively easy to make a garden look good from mid-May to late June in New England. A succession of woody plants and perennials come out of their winter slumber and burst forth with color and form. It’s a lot harder to create an appealing, visit-worthy property at the end of September when most gardens look tired.
This year, Ellen Lahti, the Garden Conservancy’s coordinator for the greater Boston area, set out to find gardens that met the description of ‘still looks great at the start of autumn.’ She succeeded spectacularly with two properties that were open on September 27.

‘The Garden on Bennington Road’ in Lexington occupies a steeply sloped site backing up to conservation land. At two acres with nothing behind the property but hardwood forest, the location has the feel of something much farther away from a city. Still being fine-tuned, it is also a garden into which considerable money is being spent intelligently. Three terraces step down the hillside to a lawn below, creating a series of outdoor rooms ranging from intimate to grand. The stonework is meticulous and different materials – granite, bluestone and brick – further help differentiate spaces. Unusual specimens - including a Seven Sons tree (Heptacodium miconioides) in full, fragrant bloom – fill these rooms.

We spotted a familiar face at the garden – Tess McDonough of Sequencia Gardens – who maintains the property. She gave us the guided tour with emphasis on the displays of tropicals and annuals in containers of every color and material. The intelligence extends to the perennials, which are a mix of summer- and fall-blooming ones with an emphasis on natives. There are walks down to a small man-made pond that, Tess says, is used for ice skating in the winter.

All in all, it’s a beautiful garden that, rather than being just a showcase, looks as though it is regularly used.


The Gardens at Clock Barn is on the main road from Concord into Carlisle, which is to say it’s a two-lane road thick with venerable homes on large chunks of land. The house and drying barn date back to 1790, the garden has been a work in progress for thirty years. It, too, is a product of a great deal of money being intelligently spent though, in this case, the driving force behind the design is one of the homeowners.


But it is also a garden with its own staff – a property manager, a gardener and an assistant – and the care and long-term plan show. The vegetable and cutting gardens are ripe with raspberries and dahlias, late-blooming tall rudbeckia surrounds a tennis court. A formal, parterred mosaic garden plays in subtle colors and textures.

It is an extensive garden filled with woodland walks, a small orchard and a pond. On this late September day, color was everywhere, provided by the aforementioned dahlias, hakonechloa and unusual asters. Garden manager Guy Doran met us at the entrance with a map of the property (reproduced at left). Rather than being an affectation, it proved to be a useful guide to finding our way around a deceptively large property.

The two gardens were a great bookend to a summer of viewing gardens. Yes, a hard frost will reduce the dahlias to limp greens, but these are gardens that refuse to declare the season over and done with when the calendar turns to fall
Posted by The Principal Undergardener at 7:15 PM 1 comment: