Growing up, I didn’t understand the fuss about apples. They were mushy, tasteless things that were already showing brown spots by the time they appeared in our local supermarket. But then, I grew up in Miami, that was more than half a century ago and the nearest apple tree was six hundred miles away.

I had my first taste of a just-picked apple when I was in my twenties. With that taste, I finally understood what I had been missing. Since then, picking apples in September has been one of the joys of early autumn. 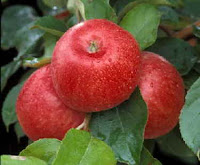 This past weekend, Betty and I ventured 45 miles north to Doe Orchards in Harvard, Massachusetts to pick Macouns. Doe is a family-run business and has a 25-acre apple orchard plus two acres of blueberries and raspberries. There are closer orchards to our home, including nearby ones with Macouns. But Doe has magnificent, mature trees and apples are their primary business. The location is a hilltop and the trees have the air and light they need to produce luscious fruit.

This has been a very good year for apples in New England. Trees bloomed on schedule and there was no late hard frost or May snow to destroy the buds. The interminable rains of June and early July came after the fruit had set. The rain meant tree roots had all the water they could absorb and so the apples never lacked for moisture as they grew. A relatively dry August and September meant the fruit ripened slowly. The trees from which we picked were heavy with fruit, the Macouns huge with no loss of flavor.

We pick Macouns because they are, hands down, the best apple around for fresh eating, for baking and for making the two dozen jars of apple butter that will tide us over the winter, offering a tart, smooth reminder of autumn’s pleasure. Macouns are especially sweet, very aromatic and their flesh is tender and snow white. They have an especially satisfying ‘snap’ when you bite into one. 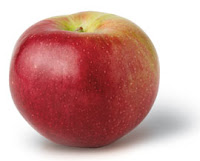 Macouns are Johnny-come-lately’s among apples. They were developed at the New York State Agricultural Experiment Station in Geneva, New York in 1932 and are named for a famous Canadian fruit breeder W.T. Macoun. We’ve picked them as far south as Gettysburg, Pennsylvania.

Apple butter is a fine souvenir of a harvest but, while the apples are fresh, they’ll be eaten with several meals a day and as in-the-car snacks. In what may be an apple’s finest incarnation, they’ll be the star of Molly O’Neill’s Apple Walnut Upside-Down Cake, which can be found in ‘A Well Seasoned Appetite’. Ms. O’Neill (who is Paul O’Neill’s baby sister in addition to other accomplishments) specifies Macoun apples in her recipe. Who can go against the instructions of the sister of a Yankee legend? Betty may make as many as half a dozen of these desserts during September and October.

We’ll make another trip to Doe Orchards when our half-bushel-sized bag is empty. The apple butter we put up will be made from those last specimens. Come January, jars will get opened and spread over waffles; reminders of the wonderful autumn of 2009.
Posted by The Principal Undergardener at 7:32 PM