Stewards of the Land

The town of Medfield had several incarnations before it was a suburb of Boston. It was, however briefly, the straw hat capital of the world. It was an artists’ colony. It played a small but pivotal role in the King Philip War. Mostly, though, it was a farming community. The land upon which our home was built 14 years ago previously grazed sheep and was a working farm.

Around 1880, Boston’s growing affluence coupled with an excellent rail network created a new market opportunity for Medfield: ice. Farmers diverted streams to flood fields to a depth of six feet or less, then harvested ice in the winter, storing the ice in sawdust for use throughout the year. It was a good, niche business until the advent of year-round ice-making equipment in the second decade of the new century.

Danielson Pond, behind our home, began its existence as an ice pond. Sometime after 1880, a colony of snapping turtles (Cheldyra serpentina) made it their home. For a hundred years, the snappers lived in the pond, doing what turtles do. Each spring – in the last week of May – the pregnant females lumbered up the slope to high ground, climbed the farmers’ rock walls, and found a suitable place to lay a clutch of eggs. A few hours or a few days later, the turtles returned to their pond.

The building of our home and the creation of the gardens around it has been a transient event in the lives of these turtles – some of which are many decades old and have shells approaching two feet wide. Just as they learned to breach the farmers’ walls, so they have accommodated themselves to our home and garden. 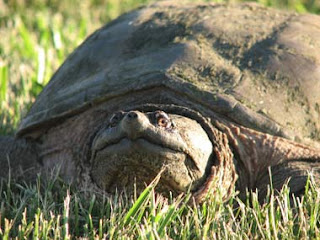 Saturday morning, a turtle made her appearance on our front lawn. She was mid-sized – her shell was perhaps a foot wide indicating she was 15-20 years old – so she had made this trip many times before. She was investigating the perennial border along the sidewalk when we first encountered her. Directly in front of her was a mound of common Lady’s Mantle (Alchemilla mollis). To its right, an infestation of Japanese anemone we have been attempting, with limited success, to dislodge for years. To the turtle’s left, a carefully nurtured clump of Eupatorium chocolate that will be in its glory in late September.

We made the decision when we first encountered these snappers that we would do nothing to interfere with their egg-laying ritual. They will lay their eggs where nature dictates and, if it’s in the middle of the Eupatorium, so be it. There may two to three dozen one-inch-diameter eggs in a clutch laid in a shallow hole. Most will be immediately dug up by foxes or other foragers. Those which are not eaten will hatch in eighty days and must make a perilous trek past waiting predators which consider soft-shelled newborn turtles a delicacy. The literature suggests perhaps one turtle egg in a hundred makes it to become an adult.

Snappers may dig three or four holes before finding a satisfactory depository. The ‘dry holes’ remain excavated but uncovered, the final nest will be filled. We’ve identified as many as five nests on our property each year. It is our practice to mark the sites so as not to accidentally walk on or dig in the area. This year, we’re also top-dressing the nests with Milorganite – a fertilizer made from sewage that animals reportedly find repugnant. If we can improve the hatching percentage by a few points, so much the better.

We are stewards of our little chunk of land. While the pond may be the work of man, the turtles pre-date our occupancy by more than a century and it is our responsibility to accommodate ourselves to their nesting habits, not the other way around. One of our first acts as homeowners was to build a series of stone ‘ramps’ over the old farmers’ walls, the better to facilitate their migration. If our stewardship entails rehabilitating a few perennials or rock garden plants along the way, that’s a small price to pay.
Posted by The Principal Undergardener at 5:44 PM