Horticulture amid the art, or maybe vice-versa

Once, many years ago, I proved once and for all how little I understood modern art, by asking a Duane Hanson sculpture what time the gallery closed. Admittedly, it was an honest mistake that could have happened to anyone. And so perhaps I could also be forgiven this past Saturday when I asked Jill Nooney at Bedrock Gardens (that's her at left) if a large tree by her barn was a work of art or just a tree infested with the worst case of autumn webworms I’ve ever seen.

“It’s webworms,” she explained. “They’re horrible this year.” Then she reconsidered and shrugged. “Or, maybe it could be Christo in the ash tree. I never thought of it that way.”

Welcome to Lee, New Hampshire and Bedrock Gardens. It is, without a doubt, one of the most unusual gardens I’ve ever had the opportunity to visit. To begin with, it’s open to the public just four days a year (other days by appointment). If most public gardens entreat you to visit, Bedrock Gardens, which is private, seems to go out of its way to make itself tough to get into without an appointment.

Under development since 1987, the garden encompasses 30 acres (see the nearby aerial view and map; click on them or any of the other photos for a full-screen view). It is the vision of two individuals, Jill Nooney and Bob Munger. Ms. Nooney, a graduate of the Radcliffe Program in Landscape Design, is a horticulturalist and landscape designer. Mr. Munger is a retired physician and self-described natural-born tinkerer.


They are both artists and Bedrock Gardens is as much about the whimsical metal sculptures they’ve created as the garden in which the art is displayed. The preceding sentence is not intended to take anything away from either the sculpture or their garden – both are unique and quite beautiful. Both are full of a playfulness that is too often missing when bright minds are constrained by matters of finance, zoning boards or trustees. 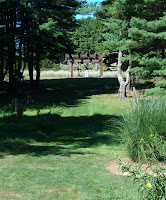 I’ll start with the garden. To me, the dominant feature is the GrassAcre (at left), which is half a dozen different specimens of miscanthus tightly planted to form a living, abstract painting. The aerial photo, probably a year or two old, doesn’t do it justice but then neither do any of my attempts to capture it, so you’ll just have to take my word for it. There is a spiral garden and beautiful parterre formal garden with pool. Perhaps my favorite is a sleeping room set in the woods with a series of step-down pools that positively sing. You approach this area through what appears at first to be an arch that, only when you’re within a few feet of it reveals itself as a set of three giant tumblers. 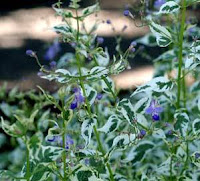 The horticulture ranges from the ‘kind-of-interesting’ to the ‘wow’. A Caryopteris divaricata 'Snow Fairy' stumped the experts in my group (it’s a distant cousin from the Himalayas). There were at least three specimens of heptacodium (seven son tree) on the premises, all in bloom. An espaliered fence made of apple trees was a show-stopper. The garden also gives you ample opportunities to pause, rest and observe. There are numerous pergolas and shelters that offer inviting places to sit and contemplate.

Most of those seating opportunities appear to have been wrested from tractors, which brings me to the art part of the garden. The co-owners are both artists with an eye for seeing what fits with something else. There are, literally, hundreds of sculptures large and small scattered throughout the garden. They are almost entirely the detritus of an earlier industrial era, bolted and welded into shapes that please the eye. Most require close inspection to reveal their mechanical origins, sometimes bringing a smile of recognition. Most are for sale. The shelters, too, are industrial architecture rescued and re-purposed for a new century.

Ms. Nooney and Mr. Munger would like to turn their site into a public garden. They’ve given themselves a decade to make that happen but, as their website makes clear, they’re not altogether certain how to proceed.

It is a unique place and a beautiful garden. Unfortunately, it is also out of the way (twenty miles east of Manchester and eighty miles north of Boston) and open far too infrequently. Their next open day will like to be in May 2011. If you’re ever in the vicinity, you might want to consider calling to ask for an appointment.

(Postscript:  Jill Nooney has posted four open days for 2011, all Saturdays.   They are May 14, June 11, July 9, and September 10.  It might be well worth checking the garden's website to see if additional open dates will be offered.)

Posted by The Principal Undergardener at 8:39 AM

The Principal Undergardener
I retired from the corporate world in 2005. My 'second act' is as a speaker and a writer of mysteries, many of which use horticulture as a plot point. My 15th book, 'Murder Brushed with Gold', has just been published. You can purchase my books directly at https://the-hardington-press.square.site/, through Amazon.com in print, audio, and e-book formats, as well as through Barnes and Noble's website and independent booksellers. You can read excerpts of those books as well as my other work at www.TheHardingtonPress.com. I lecture around the country with talks that include 'Gardening Is Murder’, ‘Gardening Will Kill You', and 'Strong Independent Women'. See my website for more details. My wife, Betty, is a Lifetime Master Gardener, horticulturalist, and noted gardening lecturer (see her work at www.BettyonGardening.com). Demanding a title of my own, I have given myself one: the Principal Undergardener.